Made in England – remastered by Schulte

First class despite being second hand. With a wide range of knowledge, creativity and an open view, the highlights of tomorrow will emerge in Kürten from abandoned instruments.

The spectrum ranges from professional restorations of historically valuable instruments up to the construction of new works.

Schulte - Expertise for over 10 years in the field of Anglo-American organ building.

Our brochure as PDF

Our brochure as PDF (German) 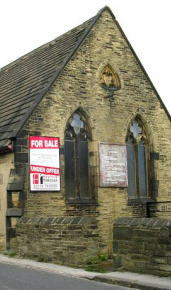 The number of church closures is much higher in England than in Germany. In addition, the musical requirements of the liturgy have changed.
For these reasons, many instruments are becoming redundant.
Many of them are well-preserved instruments, sometimes of historic value. Once restored, these organs would be able to provide many more decades of reliable service.

It is our mission to support church parishes finding a new pipe organ. We will locate matching instruments and create concepts which apply to the given technical, architectural, musical and liturgical aspects.
Thus, we are able to offer restructured instruments with a 15-year guarantee at prices that vary by half of the price of a new organ, depending on the size of the project.
Besides, it is the fascinating tonal concept of English romantic organs that we are able to offer and which is highly appreciated.

What are the possibilities when talking about English or American organs?

Basically, there are two possibilities:

For a restoration we are committed to finding a suitable instrument that fits into the new location without great intervention in the substance – technically, architecturally and tonal. A charming example of this is our Steere&Turner project in Köln-Rodenkirchen.

Restructuring projects offer considerably more flexible possibilities. Here, individual parts of the organ are restored and used (e.g. windchest, pipework, bellows) and the rest is finished according to our standards for a new organ construction. This means that we have technical and architectural freedom and can approach a situation in terms of space requirements and design in a similar way as we would with a new construction. To do this, of course only instruments can be used which are not of historical significance.

Which organs can you offer? Even for communities / parishes abroad?

When we receive a request, in all probability we always find a few suitable instruments. Since the transport still keeps the entire costs of an organ project within reasonable limits, we can bring the organs worked on by us pretty much anywhere in the world. Hence we have already brought second-hand organs to Castelnuovo dell’Abate (Italy), Smiltene (Latvia) and Castelo Branco (Portugal).

Are the organs that you offer in your possession?

Mostly not. The organs are still almost exclusively at their own current locations, most of which are in playing condition. That is why there is always a certain amount of fluctuation in our inventory.

Can the organs be viewed in advance?

As a matter of fact, we put a lot of emphasis on viewing the organs in question in advance, together with the community and the supporting organ expert or another neutral person. No one should buy a pig in a poke.

The organ tours are organised by us.

Which information can you provide about the instruments?

It varies. When we receive notice of a newly available instrument, we are initially dependent on the information that we receive from the communities. The extent of the information ranges from just the layout to precise technical drawings.

When someone is interested in an instrument, naturally it will then be thoroughly researched in advance.

What is so special about English or American organs?

As in every epoch, there can be substantial differences between different organ-builders even with instruments built in the same time period. However, organs from the Anglo-American Romantic Epoch are principally characterised by a soft and stable fundamental sound. The crest sound is more or less pronounced, depending on the builder. Contrary to German romantic-style organs, the second manual (swell organ) is much more pronounced.

Technically speaking, the organs are similar to each other insofar as the pedalboard, independent of the manual action technique (mechanical or pneumatic), is usually pneumatically-operated. The reason for that is that the pedal organ is built as an extension to a series (this means that several stops control one rank) and the pipes are distributed to several individual windchests.

In principal it must be said that english instruments are characterised by a solid construction.

... so where are the weaknesses?

The Achilles heel of English organs are the windchests. In many cases, the upper rackboards are glued at a right angle to the direction of the channels and often get damaged and crack over the course of the decades to follow. The result is runners: neighbouring channels having connection.

However we can solve this problem over the long-term, even in climate-sensitive situations. Serving here as an example is our restructured English organ for the Portuguese community in Castelo Branco. It would be our pleasure to personally show you how we do that in our company.

English organs? Those are nothing but dull 8’-stops…

Yes and no. There are in fact a number of two-manual instruments which primarily consist of 8’ stops. However, this is not the rule and depends on the individual builder. Since we always have a larger selection of organs, we can also offer organs with a higher number of stops.

For restructuring, it is also technically possible to simply put on smaller stops. Scaling and intonation are then orientated on authentic models.

Surely all the transport costs must make this very expensive… What kind of prices are we talking about here?

Of course the transportation of an instrument is a logistic expense. Thanks to the fact that we can revive most instruments at a very low purchase price, even with a partial new construction, the prices only amount to about half the price of a new construction.

Let us assume that we would like to start a project. How do we go about it?

The basic approach is as follows:

What about the guarantee and maintenance? Is there a guarantee for foreign projects as well?

For restructured instruments, we basically give our new construction guarantee of 15 years – even for restored components. For restored organs, depending on the extent of the restoration, we also give up to a 15 year guarantee! For organs in other countries, we search for local organ-builders as cooperation partners. The requirement of the guarantee is regular maintenance, which is carried out every 2-3 years by us. The prices for this are agreed upon in advance in order to give you the control over the upcoming costs.

What are the follow-up costs?

Our warranty, as with all newly installed instruments, depends on the conclusion of a maintenance contract with us for the duration of the warranty period. In order to keep the maintenance costs within an affordable range, prices are fixed in advance, which are within the usual range.

Our actual organ from the 50s/60s/70s is quite failure-prone. How can you say that an instrument made 100 years ago would be an improvement?

Furthermore, English / American instruments that have survived to this day are, in addition to their delightful musical side, built extremely solid and will survive for many more decades after our works. 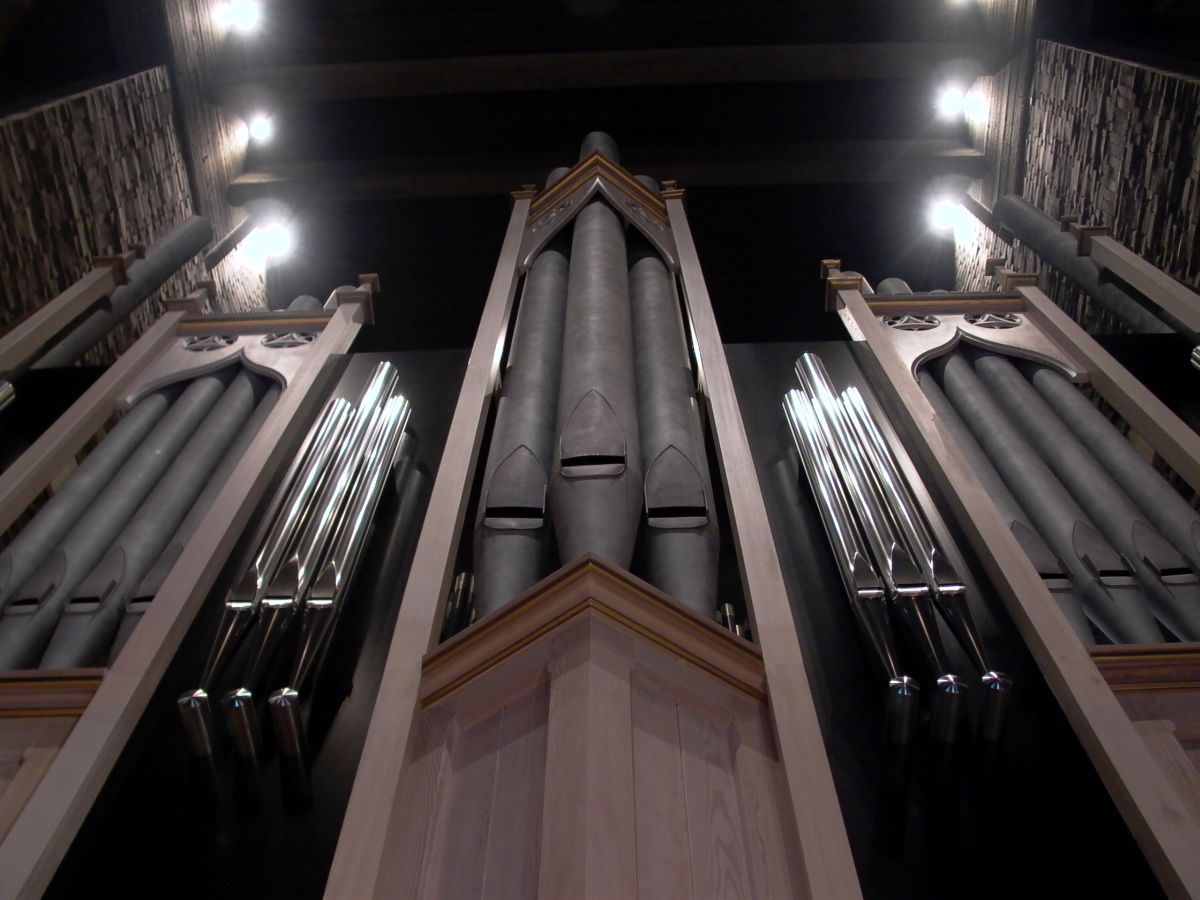 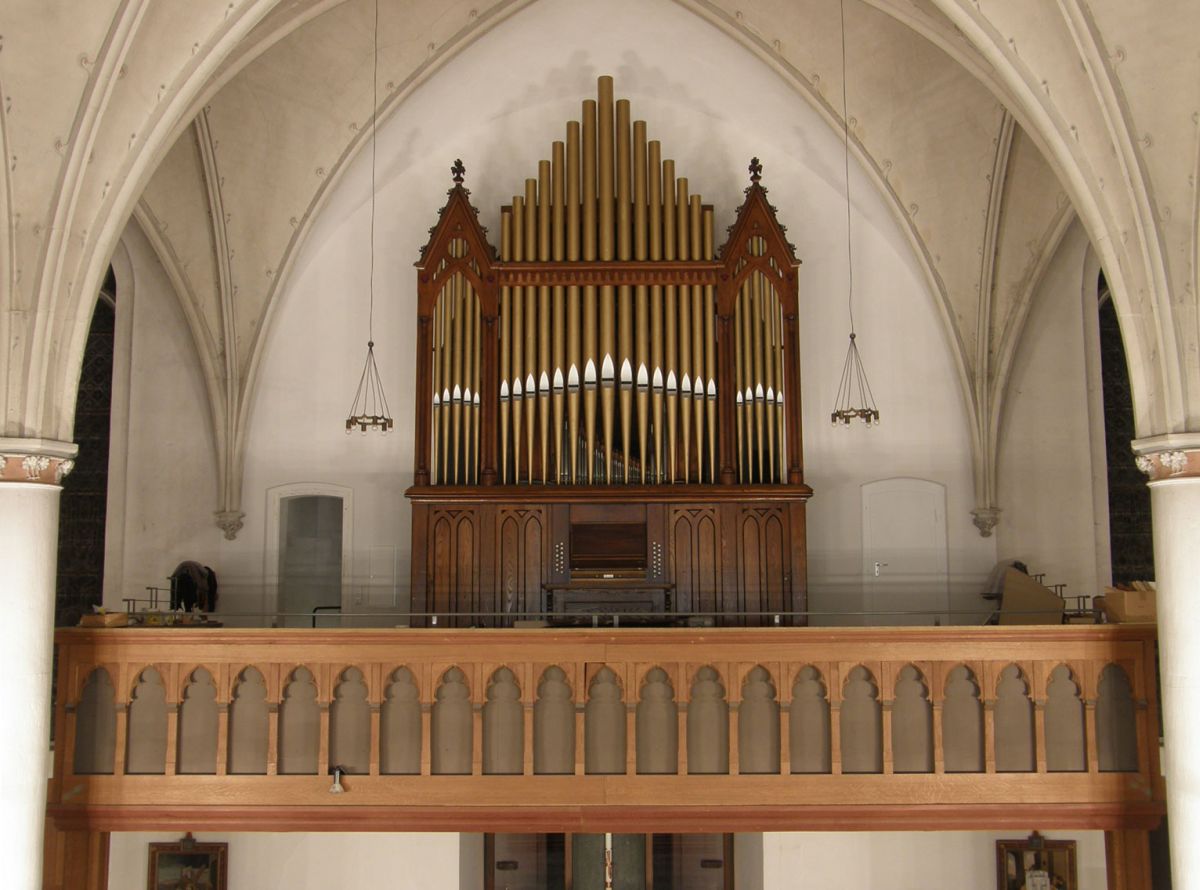 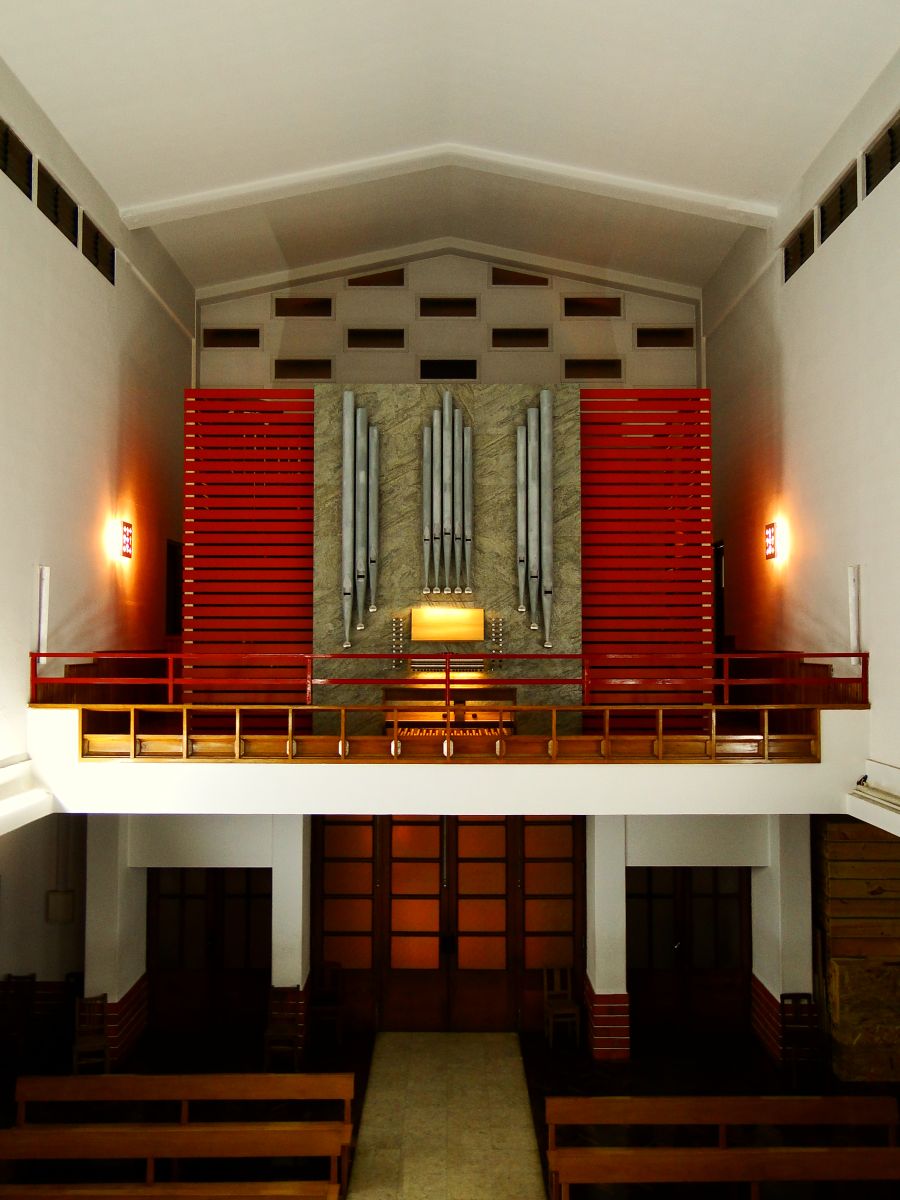 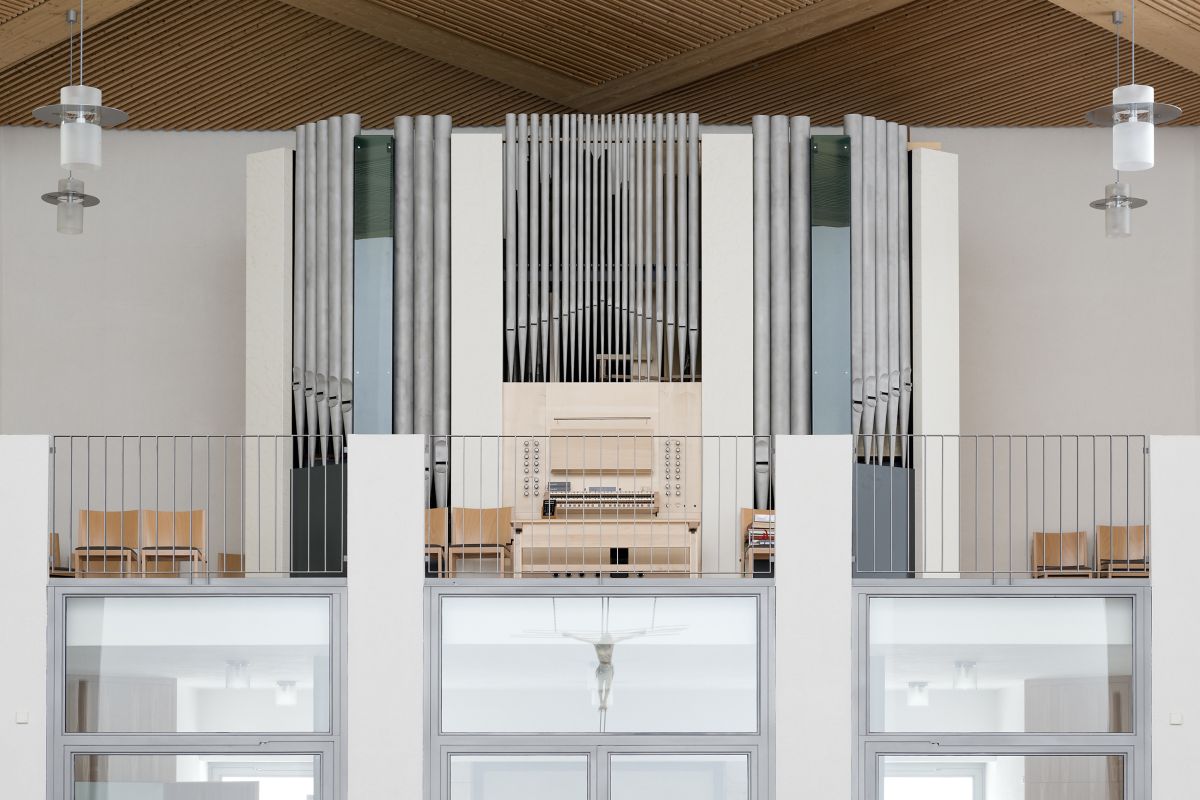 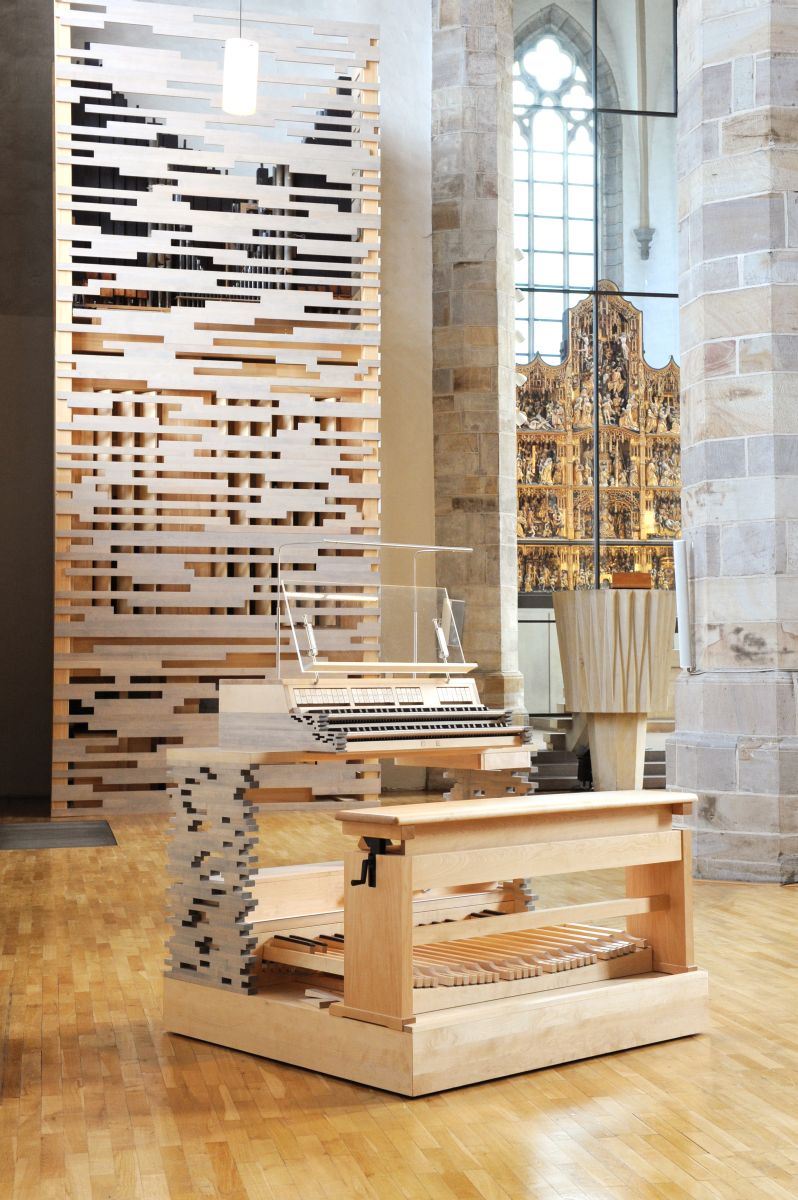 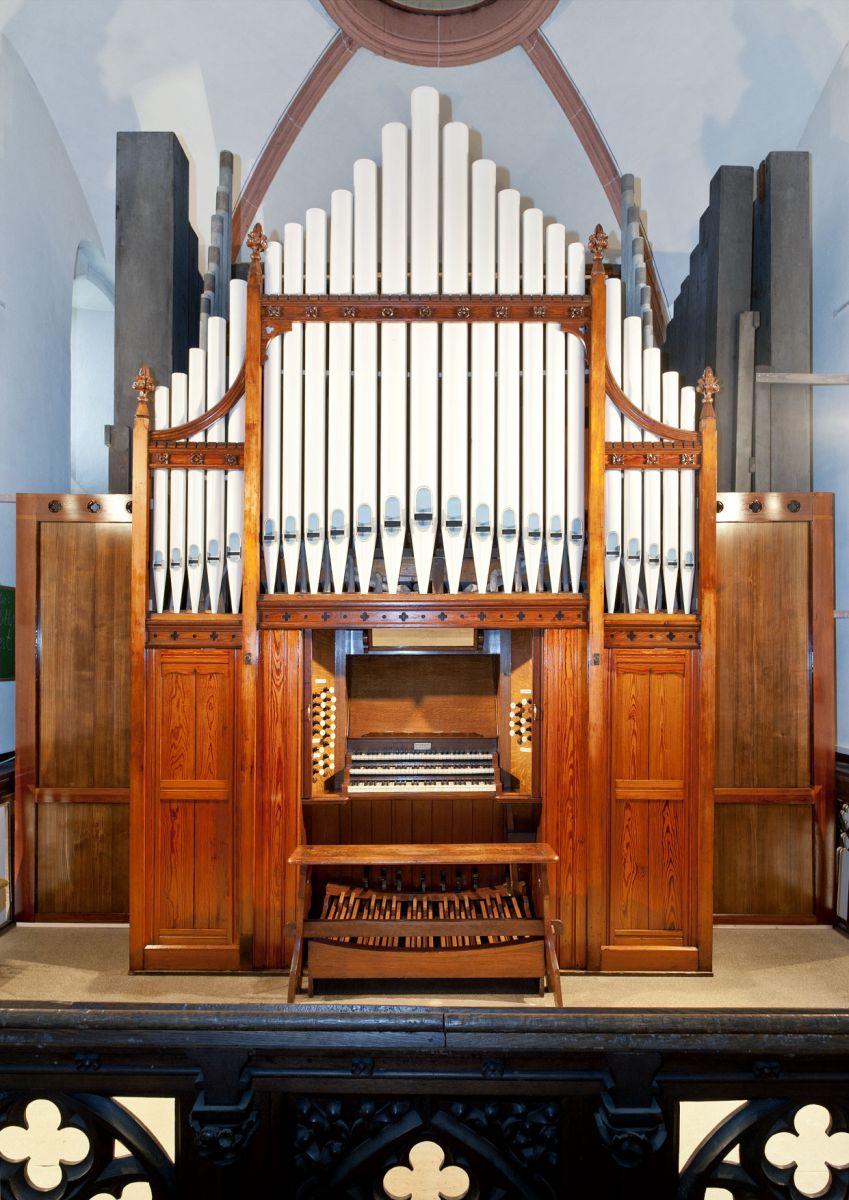 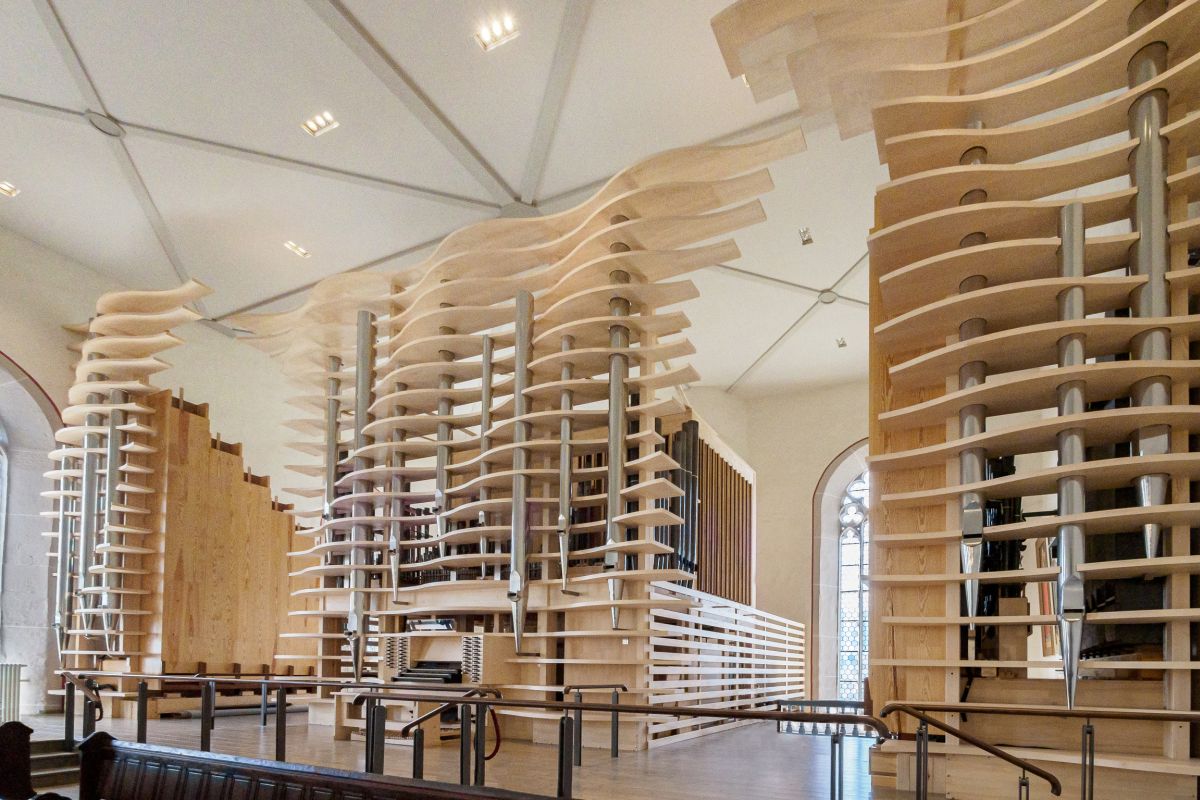 What began as the recycling of an old organ, ended up striking a chord throughout Germany: The restructuring of a historical organ by the English organ builder, James Jepson Binns, in 1907. We were very pleased about the large contract, but in all honesty, it was only over the course of the project that I slowly began to realise its significance and the impact it would have on our future.
After it was completed, the news of the largest historical organ of the English romantic era spread rapidly throughout Germany.
Only a few years later, we were widely regarded as specialists in English – and in the meantime also American - organs.

Various reasons led to that. On the one hand, after Limperich, I worked intensively and through various channels to establish a network in the United Kingdom. IT was already over the course of the work in Limperich that I became acquainted with Mark Venning, the Managing Director of Harrison&Harrison, and David Wood of Huddersfield.

The result was that within a short time, we had incorporated the then still fairly unknown world of English organs and in the meantime are feeling quite at home.

In addition, now we can create organs at any time from an abundant inventory of around 30-40 second-hand instruments – only from England. And lest we forget the growing number of contacts in the USA.
Moreover, it is my endeavour to find new solutions for old problems with an open mind and to explore new ways off the beaten path. To be innovative, be it with regard to design, choice of materials or basic concept development. That is my goal. Because everyone can do “the usual”.

And last but not least, I gratefully accept this new task. When I took over my father’s company in 2006 and saw that our main field of activity, the design and construction of new organs, was steadily decreasing, it was understandably not a rosy prospect.
However, the work with existing instruments, the further development of concepts and the search for what is possible with the resources at hand, even if they are but a few, has become an extremely satisfying task for me.

So to see how in such a short time our then only regionally active company became well-known not only nationally, but also increasingly internationally, was like a reward for me that something good came out of all the trials and tribulations we had already faced.

I believe that we are an excellent example of the development of a solid, regionally active, mid-size organ-building company in the maelstrom of time, who must first find its new face.

Specialisation is also becoming increasingly important in our business so as not to descend into arbitrariness.

The good cooperation with our English and American partners, the global contact to organ players and enthusiasts and the integration of social media networks secure our future. And not least, I enjoy the exceedingly friendly collaboration with my English and American colleagues, who have given us unfailing open and friendly support in our search for our organs, thus bringing us a little further every time,

This website uses cookies to improve your experience while you navigate through the website. Out of these, the cookies that are categorized as necessary are stored on your browser as they are essential for the working of basic functionalities of the website. We also use third-party cookies that help us analyze and understand how you use this website. These cookies will be stored in your browser only with your consent. You also have the option to opt-out of these cookies. But opting out of some of these cookies may affect your browsing experience.
Necessary immer aktiv

Any cookies that may not be particularly necessary for the website to function and is used specifically to collect user personal data via analytics, ads, other embedded contents are termed as non-necessary cookies. It is mandatory to procure user consent prior to running these cookies on your website.